Spiritual experiences, listening to live music, taking LSD, the state of flow. Becoming absorbed in a story, spending time alone in nature, singing in a choir. Staring into a bonfire, dancing at a rave, falling in love, meditation.

What do these things have in common? They are all experiences in which your identity temporarily recedes, where you lose your sense of self by becoming absorbed in something else. 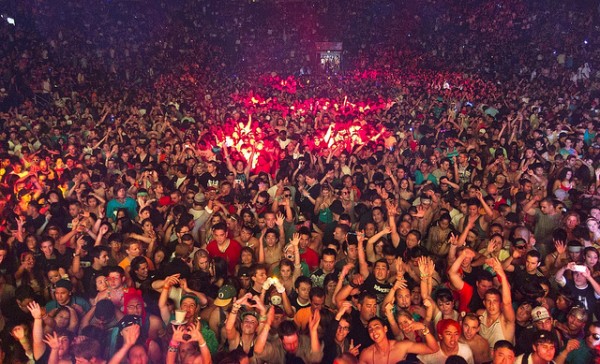 Maslow writes of peak experiences as uplifting and ego-transcending. It's interesting to me — as someone who spends a lot of time inside his own head — that experiences of diminished identity seem to bring people so much joy. It's as though losing one's sense of self is actually what's valued in these experiences, rather than being just a side effect.

But here's what I find especially fascinating:

When peak experiences are especially powerful, the sense of self dissolves into an awareness of a greater unity.

I've never myself had what I would call a spiritual experience. But I've read accounts from others, and when they mention "greater unity" I've always taken it to mean something transcendent, something mystical. Given my preference for reality, I've never been able to make sense of these kinds of experiences. Until now, I think.

I've been reading a lot of Haidt lately, and The Righteous Mind sheds some light on this. The book is about humanity's dual nature, selfish and 'groupish.' His metaphor is that the human psyche is "90 percent chimp and 10 percent bee." Of course this doesn't mean humans have actual insect DNA, but rather that we (unique among primates) evolved a capacity to form very large, specialized, cooperative groups, much like bees and other social insects. Thus we have "primate minds with a hivish overlay."

I don't think it's a coincidence that when our sense of self recedes, as during a peak experience, it's replaced by the feeling of "greater unity." In Haidt's terms, a suppression of our selfish, individual, primate instincts brings out our groupish, social, hivish instincts. This, I think, is a mechanism for bonding with our tribe. 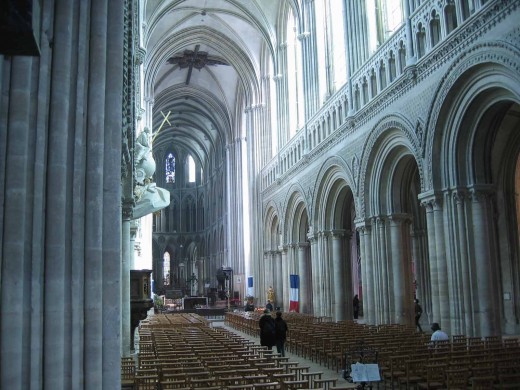 Self-suppression in religion and politics

A person entering a temple seeks release from himself. He wishes to humble his pride, to confess his unworthiness, to beg forgiveness. He finds fulfillment in a sense of abject humility. Man’s proper posture in a house of God is on his knees. Nobody in his right mind would kneel within Mr. Roark’s temple. The place forbids it. The emotions it suggests are of a different nature: arrogance, audacity, defiance, self-exaltation. It is not a house of God, but the cell of a megalomaniac. It is not a temple, but its perfect antithesis, an insolent mockery of all religion. — Ayn Rand, The Fountainhead

What is it about religion — and politics — that makes them so allergic to self-exaltation? Why are they concerned with suppression of the self? Again we turn to Haidt:

Religion and political leadership are so intertwined across eras and cultures because they are about the same thing: performing the miracle of converting unrelated individuals into a group.

To illustrate, here are some experiences (from religious and political life) where the sense of self is suppressed. All of these are typically accompanied by a sense of unity or solidarity among members of the group: 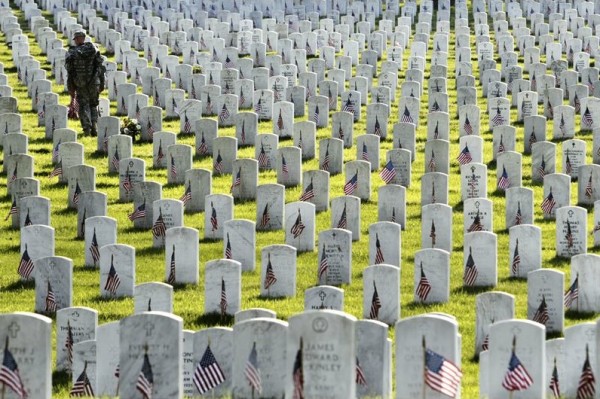 Besides enhancing group identity, having a smaller sense of self also makes you more open to influence. The less your brain is focused on your own, individual priorities, the more susceptible it will be to the priorities of others. Cults and the military use methods for ego suppression that are — how shall we put this? — less voluntary than the methods used in secular, civilian life. But their goals are the same: conditioning the individual to put the group's interests first.

Of course this view — that religion and politics exist in order to make social groups more coherent and effective — is about their proper function. Tragically, both institutions are prone to all sorts of failure modes, reappropriations, and disease states (the most common of which is getting captured by the interests of a powerful minority). Nevertheless I think it's useful to distinguish the disease states, however common, from the proper function of these institutions. 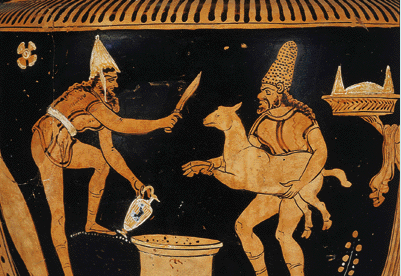 Who do we want as allies? People who are willing to put our interests, or at least our group's interests, ahead of their own. The more someone sacrifices, especially in the name of our group, the more we're willing to trust him.

Rituals involving sacrifice — especially public rituals — are signals of loyalty, of one's commitment to others. During these rituals, you get to see who's truly committed, and who's holding back, being selfish.

Crucially, rituals of sacrifice are honest signals. An honest signal is one whose cost (to the signaller) makes it hard to fake. Which of these is a more accurate indicator that someone is a member of your group: a verbal statement of membership, or weekly attendance at group events (e.g. church)? Actions speak louder than words, and expensive actions speak the loudest.

So what do humans have to sacrifice for the sake of showing loyalty to others? In the most basic physical terms, we can offer time, resources (money, food, etc.), energy, health, status, fertility, and knowledge. Each of these is a different type of economic good (tangible/intangible, transferable/non-transferable, rivalrous/non-rivalrous, etc.), and so lends itself to a different type of ritual sacrifice. But no matter how it's sacrificed (or shared), watching a person give up something of value almost always makes you more likely to trust them.

Let's look at some examples of sacrifices both big and small.

Food is a common source of sacrifice and/or sharing, whether it's an animal sacrifice, a libation, or sharing food from a hunt or at a potluck. Money is sacrificed or shared through gift-giving, alms, tithing, and philanthropy. Health and energy are sacrificed by fasting, and in much more graphic displays by blood-brotherhood or mortification of the flesh. As already mentioned, status is sacrificed by many acts of worship, especially those involving the body — kneeling, prostrating, etc. Even the simple act of wearing a yarmulke is understood as a ritualized form of lowering one's status.

Fertility isn't often wasted, but when it is, it's wasted in a big way, as when religious leaders take vows of celibacy, for example, or when a virgin is sacrificed.

Time is the easiest resource to waste, and it's sacrificed in abundance. The more conspicuous the waste, the stronger the signal. No individual advantage (in the narrow sense) accrues to the devotee who spends hours every week attending worship services. But attendance isn't meant to benefit the individual (directly); it's meant to be a signal of loyalty and commitment.

Some rituals combine many different types of goods into a single sacrificial act. A pilgrimage, for example, is a huge sacrifice of time, energy, money, and sometimes health, all for the sake of cementing one's dedication to the group represented by the sacred location or symbol. 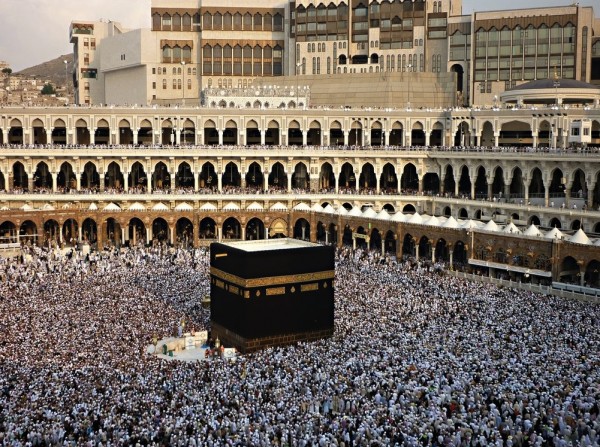 At the risk of taking this idea to its breaking point, I'll suggest that maybe some of the crazier beliefs held by members of a group (whether a religion, a cult, a nation, or a political party) are, in effect, symbolic sacrifices of knowledge. Being politically correct or religiously orthodox is a way of sacrificing truth on the altar of loyalty. No human can gain individual advantage or success in the world by believing that a wafer literally becomes Jesus in his mouth, or that his king is literally divine, or that voting is an effective use of his time. But those beliefs serve as an signal, to other members of the group, that the believer is willing to put the group's sacred values above his common sense about how the world really operates. Haidt says that "the fundamental rule of political analysis… is: follow the sacredness, and around it is a ring of motivated ignorance." Hanson says that beliefs are like clothes, which we often don for signaling rather than functional purposes.

Nominally many sacrifices are made to a god, but following Durkheim, we should note that God is really society writ large. When someone makes a sacrifice to your god, he's implicitly showing his loyalty to you (and to everyone else who worships that god).

Sacrifices don't just help foster group solidarity; they're also a powerful force for pair bonding. In fact, knowing that a particular good was sacrificed for you alone makes that sacrifice all the more meaningful.

Many courtship rituals involve the sharing or sacrifice of time, money, food, energy, and other goods. What's an engagement ring if not the perfect sacrifice, the distillation of valuable resources (money) into a completely functionless token. An "engagement car" just wouldn't have the same romance to it.

Even friendship is often cemented with sacrifice. Sharing secrets and intimate details, for example, makes you vulnerable but engenders trust. In my own life, one of the things that helps me feel closer to someone is wasting time together. My childhood and teenage friends are dear to me in part because we've sacrificed countless hours to each other. As an adult I simply don't have as much time to give, making it harder to develop deep friendships.

Sacrifice as a symbol

I'd like to conclude by illustrating how sacrifice can become a symbol for enhancing group identity. 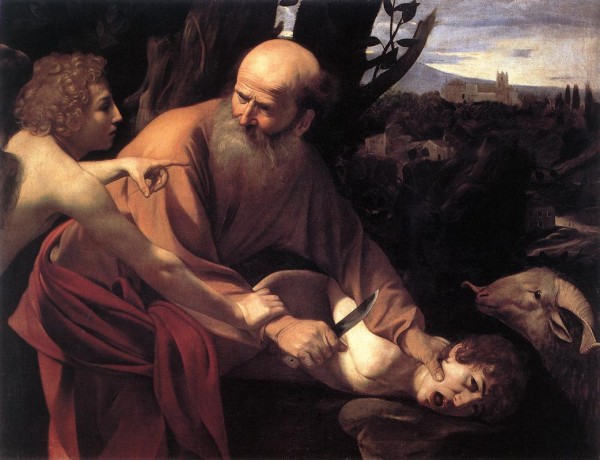 Let's look at some famous symbols of sacrifice (or acts that have taken on symbolic significance):

Behind each of these symbols lies a group whose identity and solidarity are catalyzed (cauterized?) by the sacrificial act. When a politician invokes the military, his audience will feel more loyalty to their country. When Gandhi went on a hunger strike, the Indian independence movement got that much stronger.

Martyrs represent the ultimate sacrifice for the sake of a cause, and they are an especially effective symbol, often becoming the focal point for an entire movement. Consider that over two billion people have organized their lives around the singular event of one man's sacrifice (on a cross, some 2000 years ago), and you begin to realize just how powerful a symbol it can be.

Originally published August 1, 2012.
Melting Asphalt is maintained by Kevin Simler. I publish pretty infrequently, so you might want new essays delivered by email: