Playing God for Fun and Profit

(Educational profit, that is.)

I've written a lot about religion over the past year. In one of my more methodological posts, I argued that religion is not about beliefs. The beliefs may be crazy, loud, or otherwise salient, but they're a distraction if your goal is to understand the phenomenon of religion.

It's especially distracting to engage with the beliefs on their own terms. My advice was to ignore them:

Don’t worry about the beliefs. Ignore them. Better yet, put them in little clinical boxes with labels that say SPECIMEN, and tuck them away in your favorite filing system. Then you can start to make progress on the really interesting questions. (And maybe, after that, go back and reconsider the beliefs.)

Today I'm going to re-engage with some of the beliefs. But I still think it's important to maintain clinical distance — to take the outside view rather than the inside view.

To that end, I'd like to propose two related thought experiments — two ways of getting at the phenomenon of religion from an 'outside' angle.

Imagine yourself the god of a large, early-historic tribe. Your task is to design a religion, and you have only one goal:

Gain as many loyal followers as you can over the next millennium.

But there's a catch. You aren't an omnipotent god, or even omnipresent. In fact you have only one supernatural power: you can program the minds of everyone in your tribe. Once you've exercised this power, you vanish in a puff of smoke.

So use it carefully. Whatever choices you make, the current members of your tribe (generation zero) will abide perfectly. However you want them to behave, they will behave. Whatever you want them to believe, they will believe. But after that it's hands off, and you'll have no other chance to influence the world. Later generations will learn about you only through the natural, secular forces of cultural transmission and evolution.

Your goal, remember, is to gain as many followers as possible. You are playing the long, long game.

So what kind of god will you be? 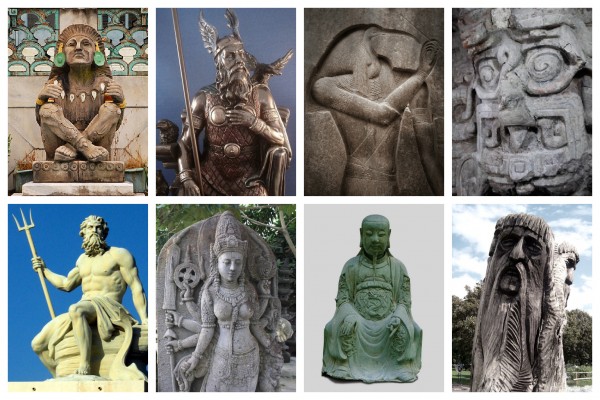 Here are a few questions to get you started:

There are plenty of other decisions you'd have to make (if you were actually playing this game), but I've gone on long enough. That should be enough to give the flavor of the thought experiment.

Of course, some of your decisions will depend on the specific context in which your tribe finds itself. A god-strategy optimized for a large, powerful, agricultural tribe might not work well for a smaller, weaker, nomadic tribe. A strategy that works for a god of the desert might need tweaking for a jungle god, river god, or island god. If your tribe is situated in a region with many competing ethnic groups, you might find it necessary to treat outsiders differently than if your tribe lives in a more homogeneous region. If your tribe has recently flourished, or lives by itself on an island, they won't need as much help thinking of themselves as special or set-apart. Etc.

The point here isn't (necessarily) to come up with concrete answers, but rather to think about the design exercise itself. What factors are relevant for determining how successful you'll be? What sub-goals will inform your overall design? [1]

You might want to break your strategy down into the sub-goals of fidelity, fecundity, and longevity. These are the three important components of any evolutionary strategy, e.g. biological replicators.

Another sub-goal is to get as much 'running time' in the minds of your followers as possible. Periodic reinforcement can help a lot here, through the effect known as priming. The more recently and more often a concept has been active (in a human brain), the more likely it is to become active again in the future.

Daily, weekly, and yearly (e.g. holiday) activities are one way to prime concepts that are important to your survival as a god. Rituals are important too — and very sticky. Because rituals are structured, formalized, repetitive, and kinesthetic, they are perfect units of teachable/learnable behavior. And when rituals are connected, ceremonially, to an important religious concept, they serves as powerful body->mind priming devices.

Anyway, my point here is that the more time and effort people spend on you — especially conspicuous/public effort — the more primed you'll be in their minds. This makes you more likely to spread to other minds, and more likely to endure through periods when you aren't as relevant to the tribe (or to individuals or subsets within it).

Now let's imagine a second thought experiment, similar to the first but with a slightly different premise.

This time you aren't a god — just a wise consultant. The elders of the same large, early-historic tribe come to you and ask for help devising a strategy that will enable the tribe to flourish, demographically, over the next thousand years. They believe — based on evidence from the past and what seems to have worked for other tribes — that a "god" concept should form the basis of their tribe's strategy. Their ultimate goal is survival and reproduction (demographic and genetic flourishing), but they think that promoting the idea of a god is a useful intermediate goal.

(In fact, the elders aren't particularly literal about this god concept, themselves — they prefer to substitute "the tribe" or "our society" whenever they hear or read about "god." For example, they would read the sentence "God is great" as "Our tribe is great.")

So, having been retained by this tribe to craft their god-concept and their religious beliefs and practices, what kind of "god" will you be?

Your goal, remember, is not to infect as many minds as possible with your religion (although that might be an instrumental goal), but rather to ensure the long-term demographic/genetic success of the tribe.

Now here's the real question I came here to ask, the question I think is most illuminating:

How should your strategy differ if you're playing the God Experiment vs. the Tribe Experiment?

As a god in the God Experiment, you don't really care about the worldly success of your tribe. If you spread to another tribe, you'd be just as happy. But if your tribe dies out before you make the leap, you'll die with them. And the success of your original tribe is a pretty useful way to end up spreading to other tribes, whether by conquest or cultural dominance. No one is going to copy the religious culture of a weaker tribe.

But what about the other direction? Is what's good for the god necessarily good for the tribe? If so, why, and if not, where's the disconnect?

You might think that "spreading your religion to other tribes" is an example of something that's important to the God Strategy, but irrelevant to the Tribe Strategy. Whether other tribes worship the same god shouldn't affect the survival and reproductive success of your own tribe, right?

But consider the benefits. Tribes that share a common religion are going to be much more aligned than tribes that don't. Religion isn't (just) about belief — it's also about culture. A common religion gives people in different tribes a shared frame of reference, shared values, shared language, and a shared narrative (of where they came from, who they are, and where they're going). Tribes that share a religion are, ceteris paribus, less likely to go to war with each other, and more likely to band together to fight outsiders. They're more likely to merge into an even bigger, more powerful meta-tribe. (This will blur the demographic lines that are important for the Tribe Experiment, but descendants of your original tribe are going to have the DNA you care about whether they're mating with insiders or outsiders. Your goal in the Tribe Experiment is to make as much of that DNA as you can, regardless of where it ends up.)

Maybe the only difference between the God Strategy and the Tribe Strategy is one of emphasis. A god will care slightly more (than the tribe does) about spreading to other minds, and slightly less about the tribe's demographic/genetic success. But the differences are at the margins; overall, there's strong alignment.

In other words, the relationship between god and tribe is symbiotic rather than parasitic.

[1] Since this is a design exercise, it's critical have a solid understanding of the constraints of the problem space. You will, of course, have to take the physical world as given (sorry no miracles). You'll also want to understand how the natural world affects the meat-based brains in which your message will live. This includes disease, death, famine, etc., and all the economic and ecological constraints that every species will encounter. Much more important, however, is to have a deep understanding of human nature — of the psychological, social, and political realities your message will face as it gets transmitted and transmuted across space and time.

Originally published December 10, 2012.
Melting Asphalt is maintained by Kevin Simler. I publish pretty infrequently, so you might want new essays delivered by email: